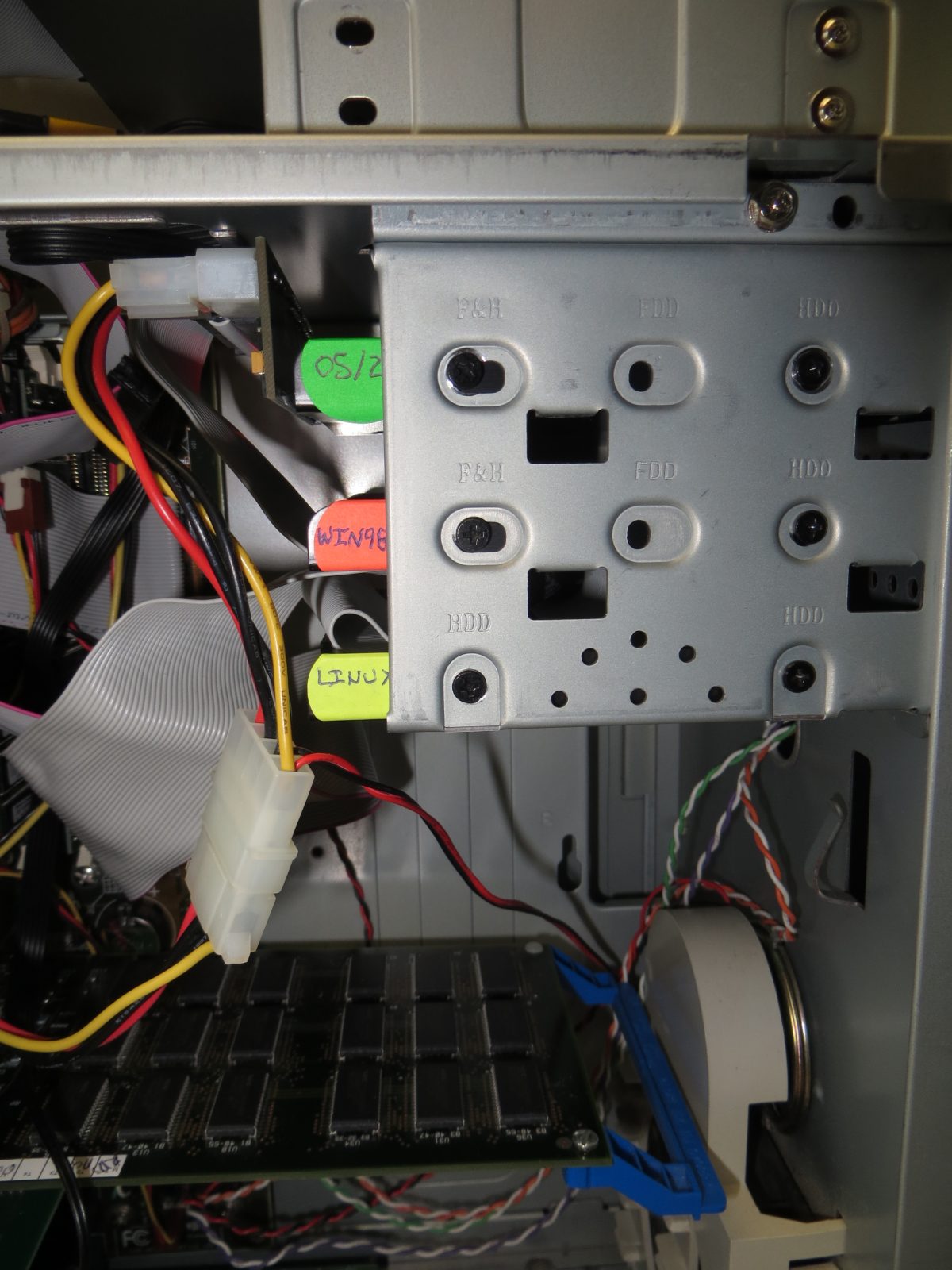 In early 2021, I converted the hard drives in my Pentium II computer which hosts my P/390E IBM mainframe processor card, which I call “Floppy Copy“. This machine boasts three different operating systems. Two are in support of its primary mission for copying floppies: Linux to host my Catweasel board (which may not see much future use, now that I have a Greaseweazle board), and Windows 98 for copying floppies using tools like IMD. It also has OS/2, in support of the P/390 board.

First some background: OS/2 had always acted a little wonky: I did the partitioning under Linux because OS/2 didn’t like to partition the 200GB drive. And then, having partitions of 2GB, 57GB, 57GB and 57GB, running OS/2 chkdsk on the last two 57GB partitions would sometimes clobber the first 57GB partition, for reasons I never understood – until I undertook this migration. (I still don’t quite understand why it never managed to clobber the 2GB FAT partition!)

So, off to Amazon I went, purchasing IDE to SATA adapters. The two from Startech and Kingwin worked fine. One from Sinloon worked, and the other did not work at all. In addition, I found, strangely, that the adapters would work with a 240GB drive, but not a 120GB drive. WTH?

So, then I went looking to see if the BIOS might be involved, and I found a BIOS update from Aug-17-1999 to Sep-09-2000. That cured the 120 GB problem. But then, in testing, I ran into the same kinds of issues on the 240GB drive I had seen on hard drives, with corruption after running OS/2 chkdsk.

Well, it turns out that this particular motherboard, a Chaintech 6BTM, has Ultra DMA-33 IDE ports – and only supports drives up to 137GB. Ahhh, so that was the problem.

I wanted to give OS/2 (and the P/390E) as much space as possible, so it got one 120GB drive. I tried and tried to move the drive partitions for Windows 98 and Linux over to a shared 120GB drive, but without success. The minute I created a second primary partition for Linux, Windows 98 would no longer boot. So, I simply imaged Windows 98 as is to a 120GB SSD (using only a fraction if it), OS/2 to a 120GB SSD and Linux to a 240GB SSD – because I already had it, having purchased it from before I learned about the 137GB limit.

Only one of the three adapters I had supported IDE master/slave. The other two had to be alone on their cable. I am using one of those two (Kingwin) permanently.

Having gotten things tested, I went about testing the IDE to SATA adapters one at a time in order to write reviews. While testing the Kingwin adapter, though, I decided to plug it in with power on. Unfortunately I had the power connector upside down, and as soon as it touched, the computer dropped power. Worse, I could not then power it on at all — completely dead. Ohhhh nooooooooo!!!

After unplugging the power cord for a couple of minutes, I could at least try and turn it on, but it would not start up – no beep, no nothing. Fearing the worst, I tested the power supply voltages – all fine. Ohhhhhh noooooooo!!!

After 10 minutes of panic, I started testing cards from that machine in a reasonably close relative, my AMD Athlon machine with an ASUS A7M266 mother board. Video card: good. IBM P390/E even passed its diagnostics. (Whew). So then I pulled all the cards out of the Pentium II as well as the IDE to SATA adapter I had been messing with at the time of the infraction, and the machine came to life!

I put all the cards in one by one, and stopped at the POST test. All good. Then, just for giggles, I hooked up that last IDE to SATA adapter – dead in the water, apparently fried. Embarrassing: I fried an adapter. The good news: it costs less than $10. Glad I purchased four of them. (I kept the Startech out in reserve because it is the only one of the four which worked and can be set for Master or Slave.)