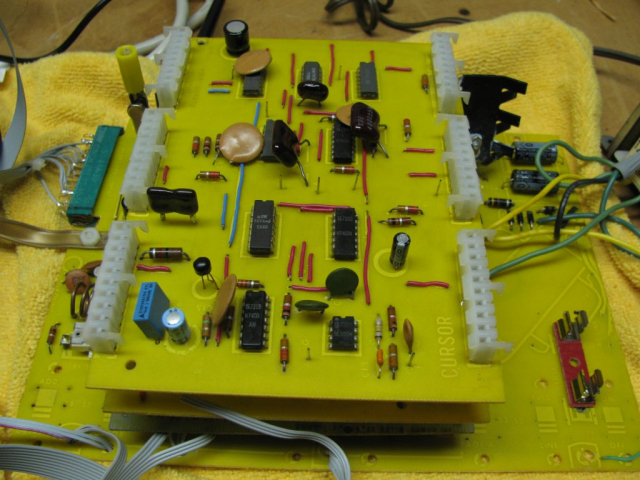 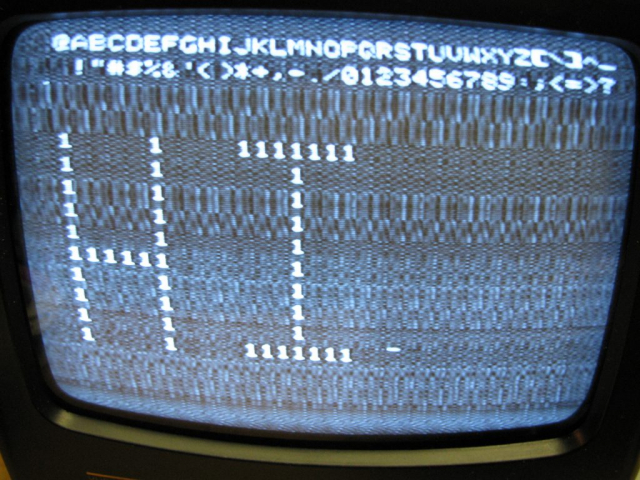 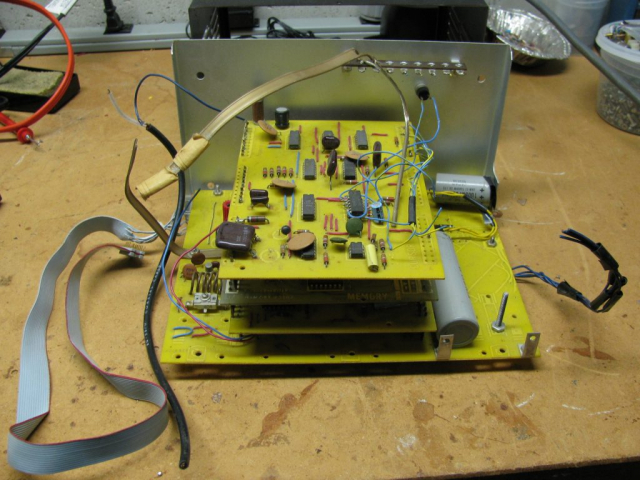 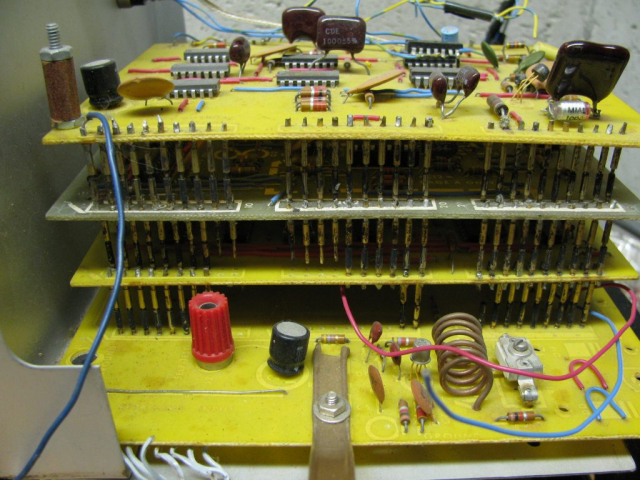 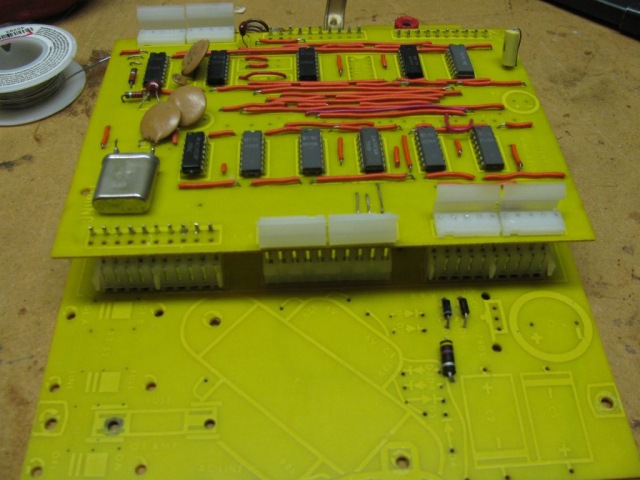 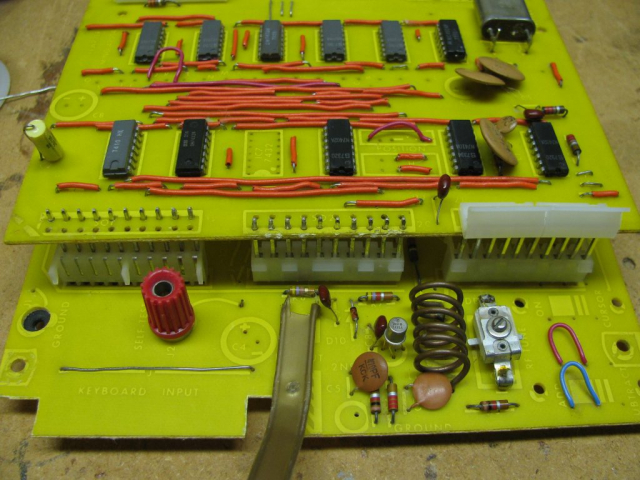 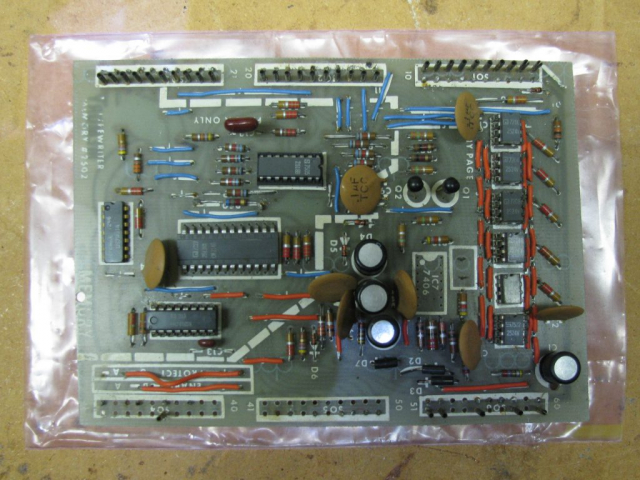 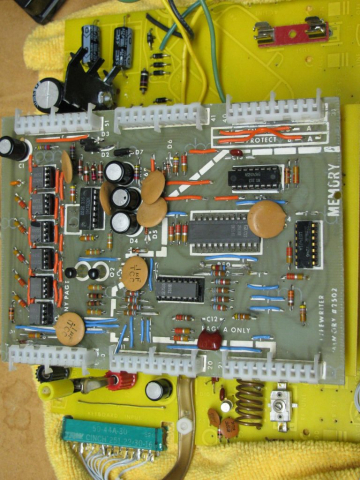 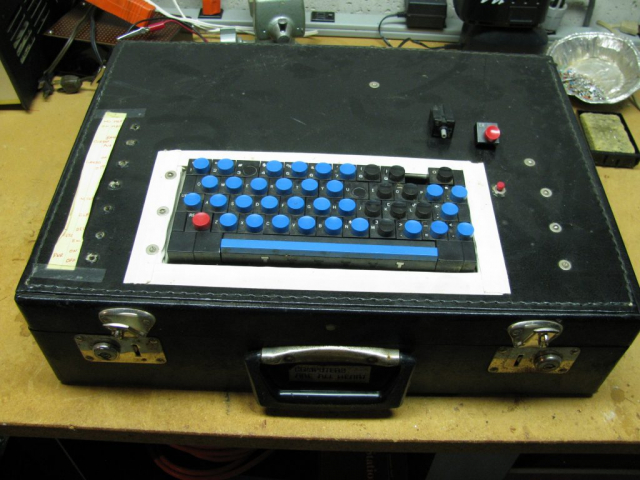 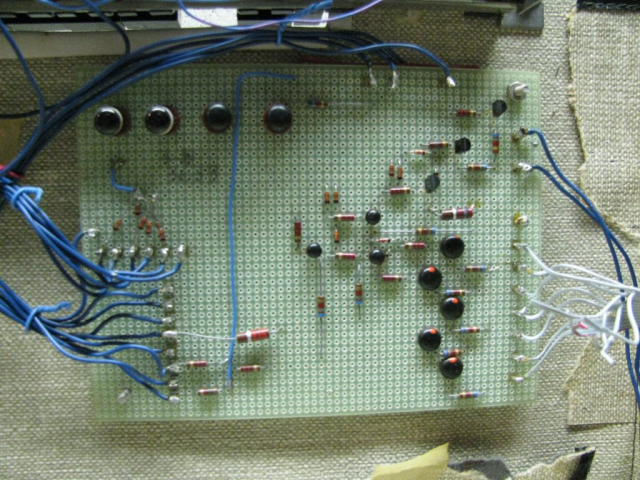 The first terminal in my collection is a TV Typewriter that I built from plans from Popular Electronics (September 1973 issue), around 1974. I didn’t have much “spare change” back then, and I could not find (or afford) the Molex connectors called out in the parts list, so I made do by taking apart an AMP connector, de-soldering the wires from the pins, and using the pins for my connectors. (Third photo).

In 2012 I “restored” the TV Typewriter, and purchased and installed the connectors as originally specified. I also removed the budget open socket connectors I had used for the memory chips, and installed modern 8 pin DIP connectors. Aside from those two changes, I left most of the parts that I had originally used in place. The display shown is via an RF modulator and a tiny little TV – and it does not look very good that way.

I ordered a keyboard from Southwest Technical Products, but didn’t have a reasonable case for it, so I put it in a cheap briefcase, along with a keyboard encoder I designed based on another magazine article.

I also have a number of display terminals manufactured by Digital Equipment and Data General. My friend Hannes has (or at least had) a really cute Omron terminal sporting an 8008 processor that needs work. 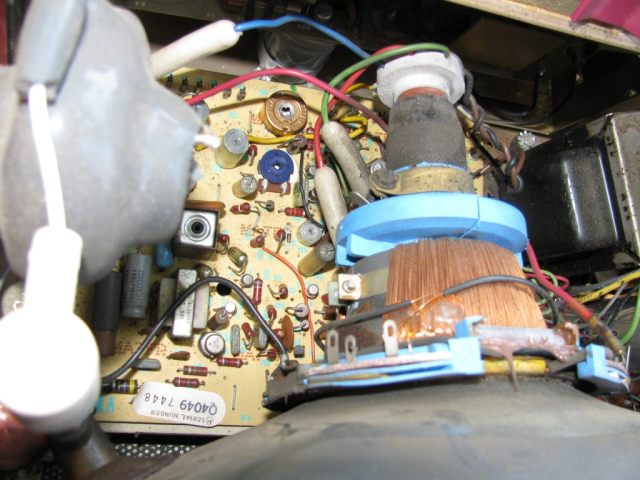 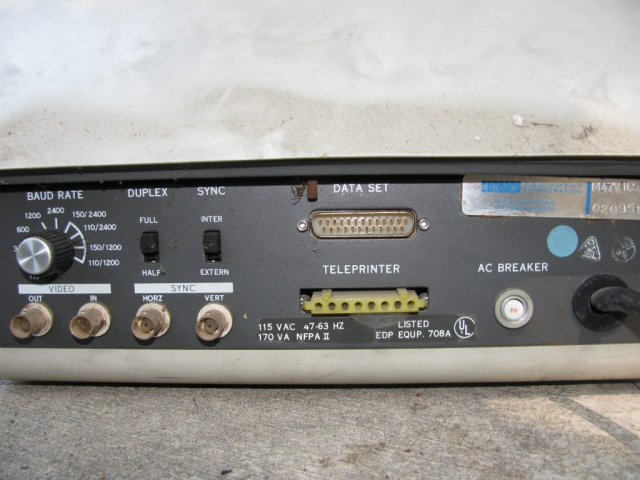 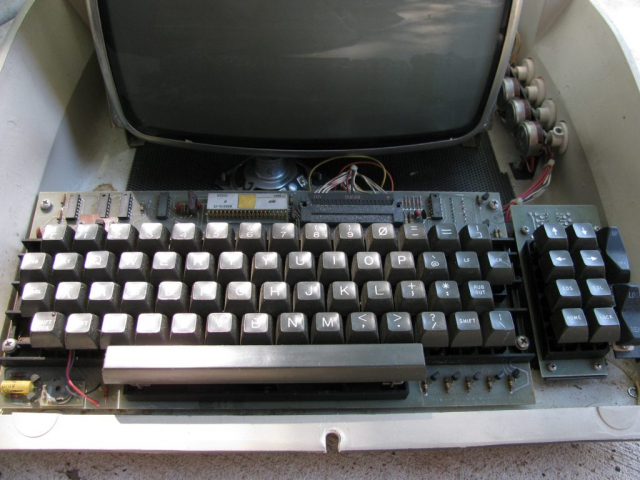 My DEC VT05 looks OK after storage in the garage (where it remains stored), but it does not work. It will need some serious TLC. I took these photos for a potential trade that did not pan out.

The first display terminal I recall acquiring was a VT-52. I used it quite a lot with my PDP-11 systems until I later acquired a VT100. Its “bell” is really more of a buzzer, and it also provides acoustic feedback, if desired. This VT52 came from the same “Second Bytes” store on North Avenue in Milwaukee from where I obtained by PDP-8/L, but at a later date. (Who is that funny guy reflected in the screen???)

Unfortunately, the last time I turned this guy on, the video brightness was considerably diminished – even though it had been fine a day or so beforehand.

The VT100 is the real workhorse terminal in my collection. It essentially defined the ANSI terminal escape sequences used even to this day. Above the VT100 is a Black Box RS232 switch that connects to the PDP-11/24, PDP-11/34, PDP-11/40, PDP-11/45, DG S/140, DG Nova 4 and, at times, my PDP-11/20 or Hannes’ PDP-11/20. The Black Box switch automatically switches depending upon which system is turned on at the time – and there can only be one, as I have only one 30A twist lock available in the main collection computer room. Above the Black Box switch is an A/B switch that allows me to connect my PC in the adjacent room to the Black Box instead of the VT100. The VT100 sits on top of one of my two RK07 disk drives that are part of the PDP-11/24 system. The VR14 is not, strictly speaking, a terminal. It is just a display. The VR14 is also the display inside a GT40, and is used in a PDP-12 as well. The VR17, visible in the PDP-11/24 System image performs the same function, but is simply physically larger. I have a couple of DG Dasher 6053 terminals. Contrary to what is show on the screens, they are both stored in the basement. I have, at times used them on my Eclipse S/140, but I don’t recall attaching them to the other DG computers.

I also have a somewhat smaller, more square Dasher 200 terminal in the collection, stored out in the garage.

UPDATE: One of my two DG Dasher 6053 terminals has now been donated to the Large Scale Systems Museum.