The collection has several workstations which run operating systems which are based on UNIX® in one form or another. Many of them I had some experience with during my career at Wisconsin DOT.

Not shown here are an SGI Indy “pizza box” workstation, an IBM RT PC and a couple of AT&T 3B2-200 computers. 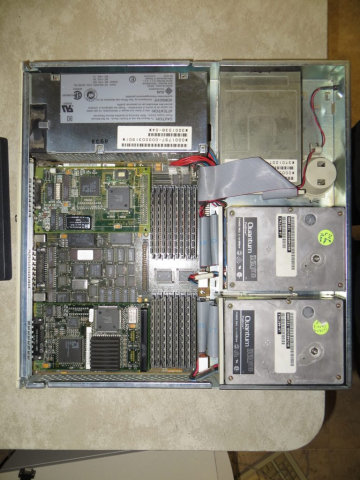 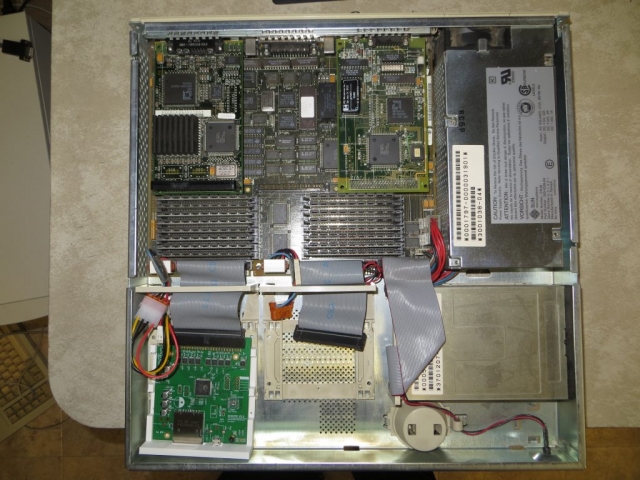 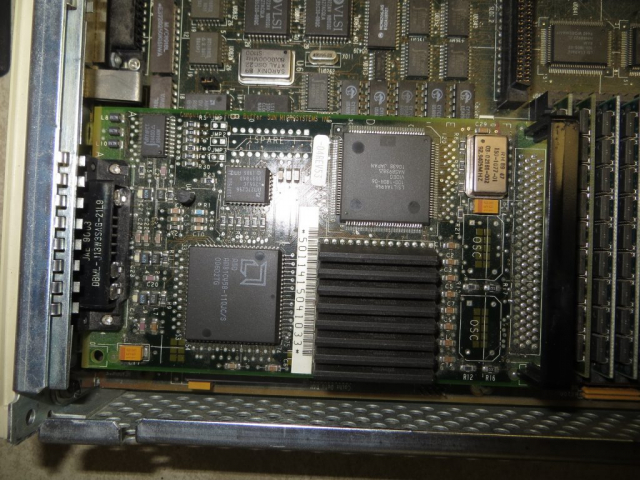 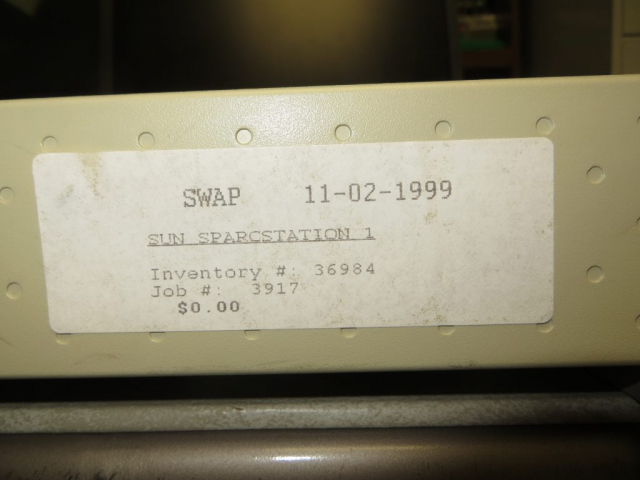 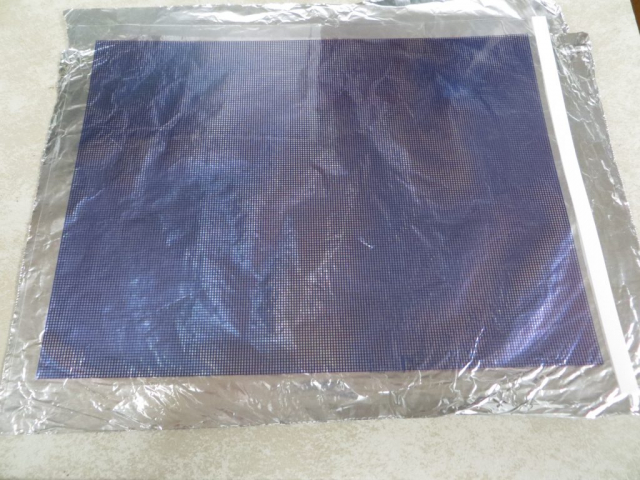 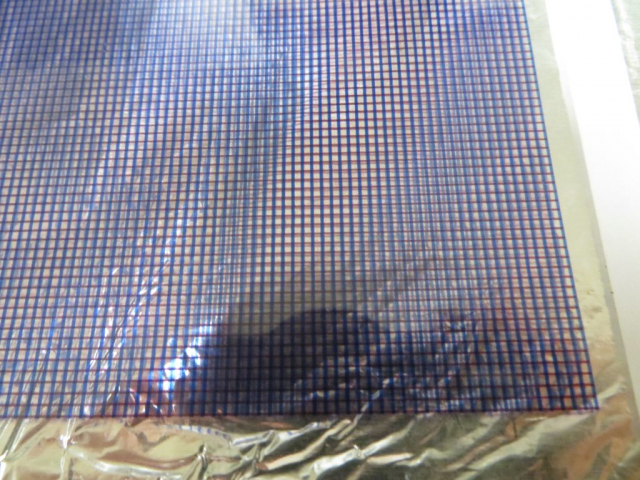 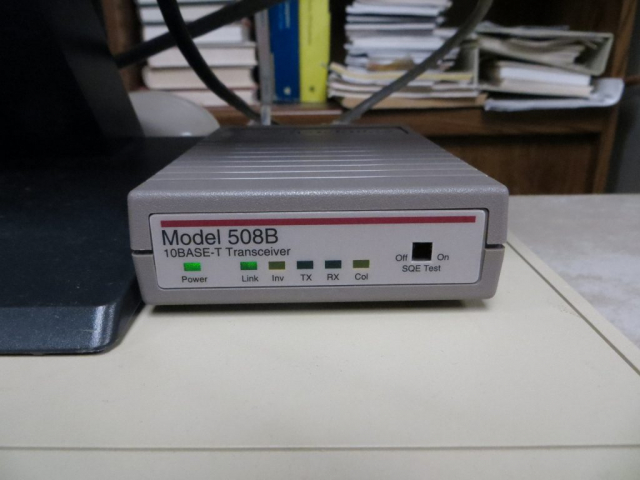 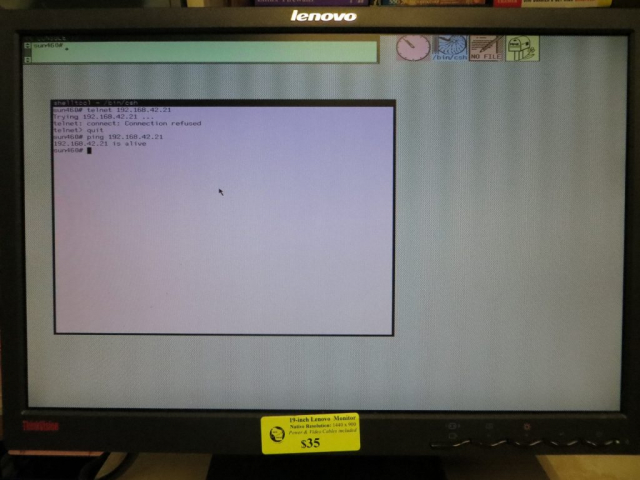 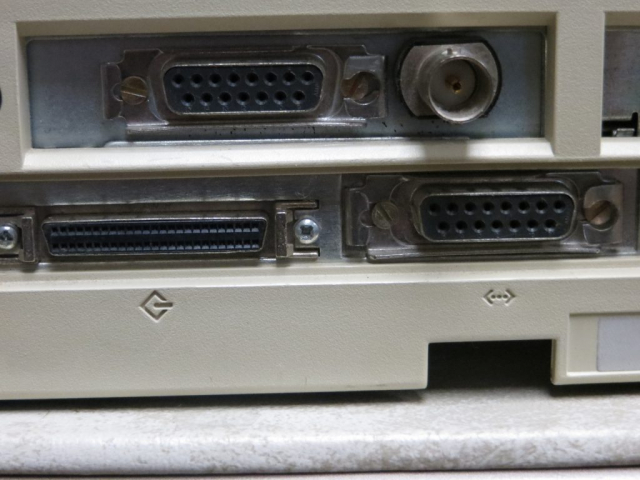 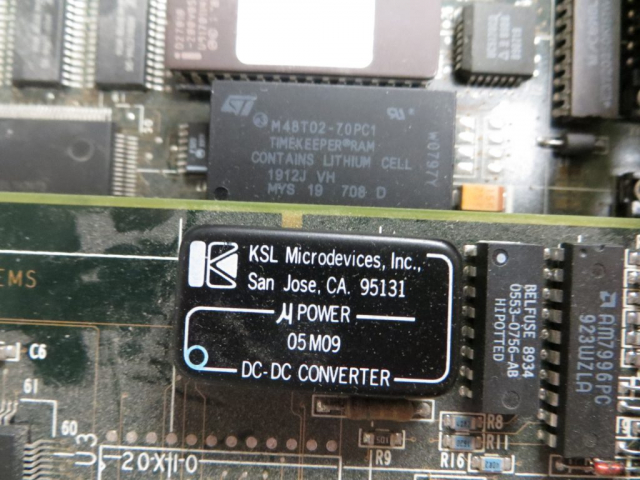 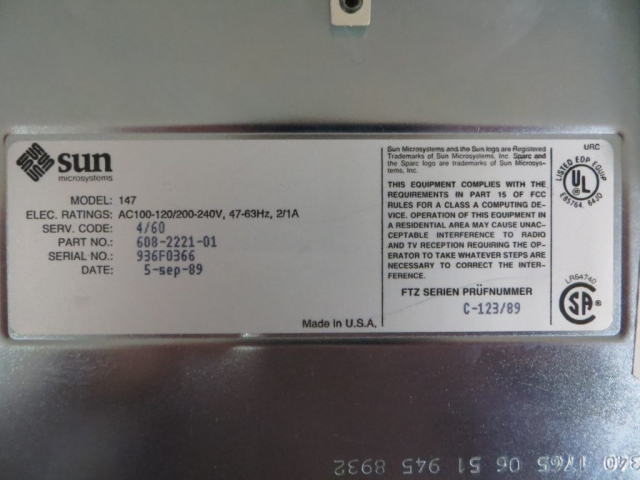 In May, 2021, I worked to reconstitute a Sun SPARCstation 1 (aka Sun 4/60) that I procured from UW Surplus way back in 1999, and which had been sitting on a shelf since then. The label on the front says it was priced at $0.00, however I think that was just the label the originating department slapped on it – I actually paid $18.99, tax included.

The disk drives had both died, but a SCSI2SD board (both V 5.2 and V6 / 2021) worked as substitutes, with little difference in performance. I set up both SunOS 4.1.4 (aka Solaris 1.4) and Solaris 2.7 (aka Solaris 7) – but the performance of the later Solaris was nearly intolerable.

The video card that came with it was has a very odd Sun specific monochrome output, but I was able to acquire a color card at low cost off of eBay this year, and swap them. I have a model 82000 universal 13W3 Interface cable, model 13W3M/HM-12P to drive my LCD screen.

The machine has two Ethernet ports – one on the mainboard (le0) and the other on an SBus expansion board (le1) – the latter has a coax “thin net” connector. I don’t have that, but fortunately I have a couple of AUI cable to 10BaseT adapters so I was able to hook it up to my network.

These systems used a Mouse Systems optical mouse – and I got a mouse with the system, but not the mouse pad – and the pads are now essentially made of “unobtanium”. I found a site on the web where someone had printed their own – dark red horizontal stripes and vertical blue ones. It does not work very well, but at least it does work. Here are the PDFs I used, which I created using the web page at incompetech.com for creating graph paper:

Somewhere along the line I also got a Sun SCSI cartridge tape drive shown in this photo. I have used that with PCs to recover cartridge data, but in this photo it is just for show. 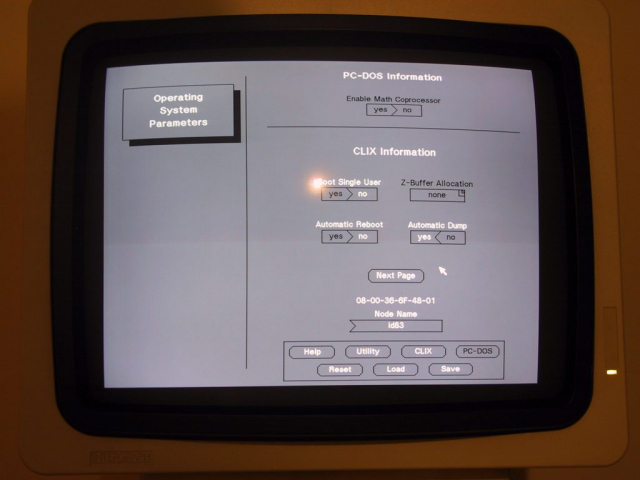 Then, Intergraph adopted the Fairchild Clipper RISC chipset for their workstations, which they sold for several years, this Interpro 2020 among them. It was located at Wisconsin DOT District 8 in Superior Wisconsin (hence its workstation name “id83”), and was acquired through the State of Wisconsin surplus sales program. These workstations were fairly useful, and served until PC graphics and CPU power eventually made them irrelevant.

As I wrote this article I discovered, to my surprise, that there is a MAME InterPro emulation for the Clipper series of workstations.

In 2021 I ordered some DB5W5 shells and contacts, and was able to use them to connect up to two LCD monitors. (The screens are not mirrored – if you look carefully, you can see that the mouse pointer is only on the left screen.)

I found the pinouts at http://www.typewritten.org/Projects/Intergraph/h0jhvb.html

If anyone is looking for a huge (if fuzzy) 19″ Intergraph display as shown in the first set of pictures, let me know. 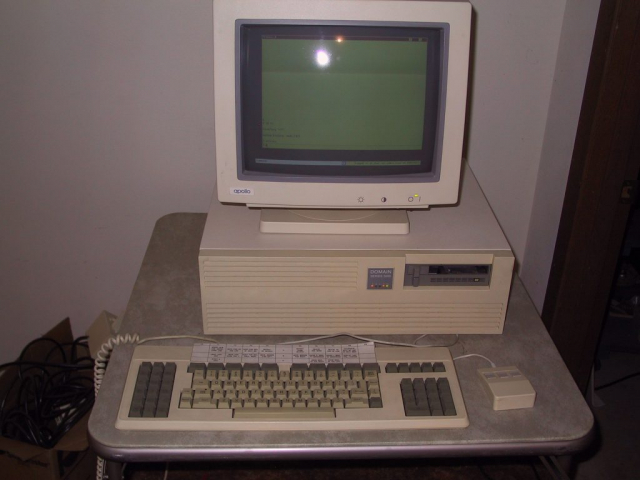 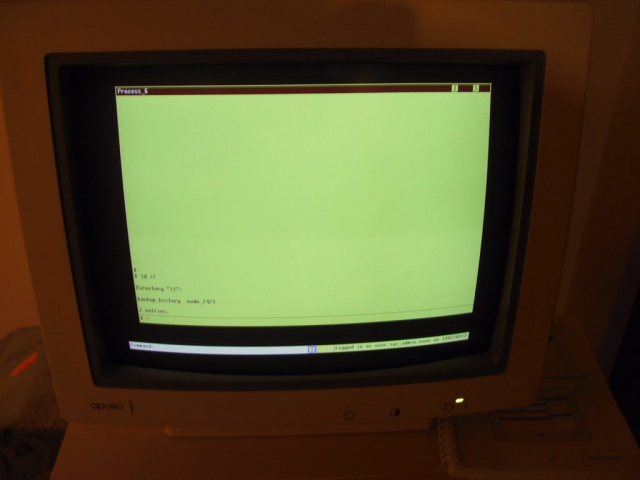 The Apollo DOMAIN Series 3000, as its full title calls it, is another of my nostalgic workstations. In the late 1980’s I participated in a group sponsored by AASTHO to develop specifications for states to use when acquiring workstations to use for highway design. Around 1989, just about the time that Apollo was acquired by HP, Wisconsin DOT issued a request for bid for UNIX® based workstations to use to run the computer aided highway engineering design package CEAL. HP won that bid based on Apollo DN3500 workstations, and a couple of dozen were acquired.

There was a good possibility that DEC could have won that bid. However, their maintenance cost projections they sent were only good for one year, and the bid specified a lifecycle cost evaluation of either 3 or 5 years (I forget). When we approached DEC for a clarification, they responded that their standard annual increase project would apply (it was something astronomical, like 15% to 25% increase per year on maintenance charges.) That cost them the bid. They started a bid protest process, but quickly realized they had no case. Had they specified a more reasonable typical inflation factor of 5%, they may have won.

Aside from HP/Apollo and DEC, we also had bids from Tektronix for their workstations. Fortunately for both of us, they could not get their workstations to work reliably – I think they were early production or even prototypes – and they were quickly disqualified. I no longer recall if IBM bid some variant of the RT or not.

This all led to an interesting story. A year or so later, the HP salesman approached me. They had recovered a stolen DN3500 which had had its serial numbers obliterated – it was of no real value to anyone, and he knew that I collected old computers. Being a state employee, I had to refuse, of course.

Then, in 1998, I was contacted by an employee of a company in Springfield IL which had this DN3000 that they would just as soon save from a landfill – which is exactly what I did – it came complete with its Apollo token ring connector cables and even a little 3 node token ring setup.

Later I acquired a compatible 3Com Etherlink Plus card so I could connect it to my home’s Ethernet LAN.

There are quite a few images of the old Apollo software distribution cartridge tapes out there – enough to install and run DOMAIN/OS (including the Aegis, BSD and SystemV shells and subsystems) and some layered products (compilers, etc.) as well, generally locatable using web searches. If you need something and can’t find it, let me know. Someday I expect I will scan my collection of HP Apollo manuals.

Finally, the MAME software emulator does a creditable job of emulating this and other Apollo workstations. 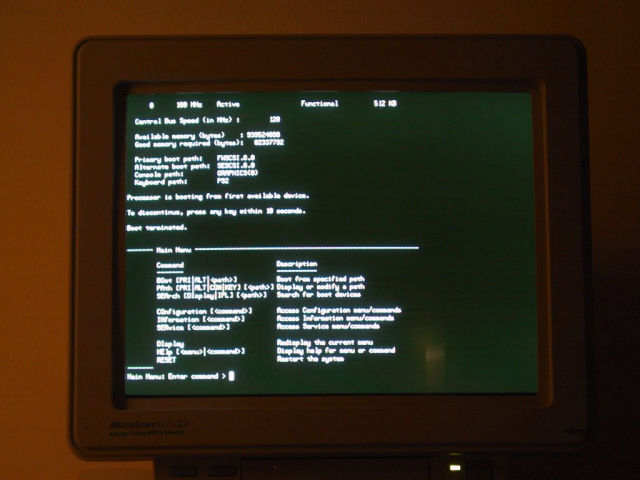 The collection also has a pair of HP 9000 C100 workstations, one of which is shown here, which were acquired from the University of Wisconsin surplus program.

Wisconsin DOT installed and used a number of those for several years, including HP 712 “pizza box” desktops, HP 715 workstations and HP 750 workstations. They also used HP 9000 Itanium-based series servers to run Oracle for a number of years.

Getting back to the HP 700 workstations, during the early to mid 1990’s, CEAL was already running on the PC platform, and the HP workstations were mostly used for specialized workstations and to run ESRI ARC/INFO software. Those applications, too eventually found their way to PCs.

For a while, Wisconsin DOT used HP 715 workstations to support both its Internet web server and its internal intranet web server. The former was eventually migrated to a PC running Linux, and the latter to the Microsoft PC platform.

For software, I have a number of HP installation disks, but the only thing I have actually run on them to play around with was an early version of Linux.