The collection has two kinds of tape drives. Of course, there are magnetic tape drives (and a couple of kinds of those), and then there are paper tape “drives” as well – the latter are listed elsewhere.

In addition to what is pictured below, I also have a Cipher 125 IPS 9 track drive “rescued” from an Intergraph VAX graphics system that was being decommissioned. 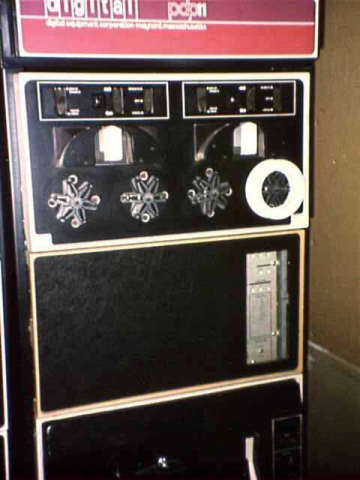 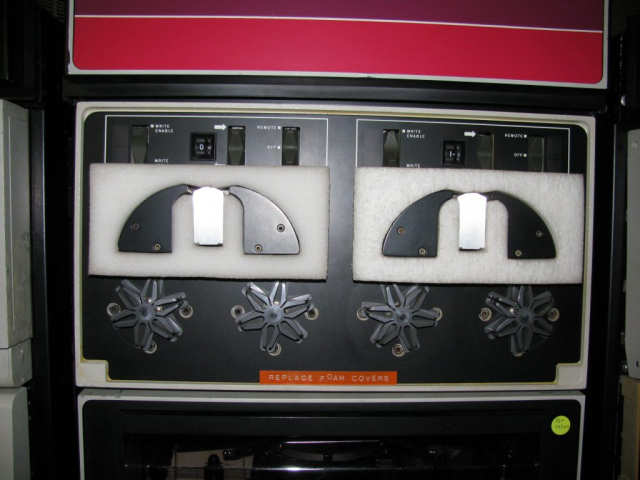 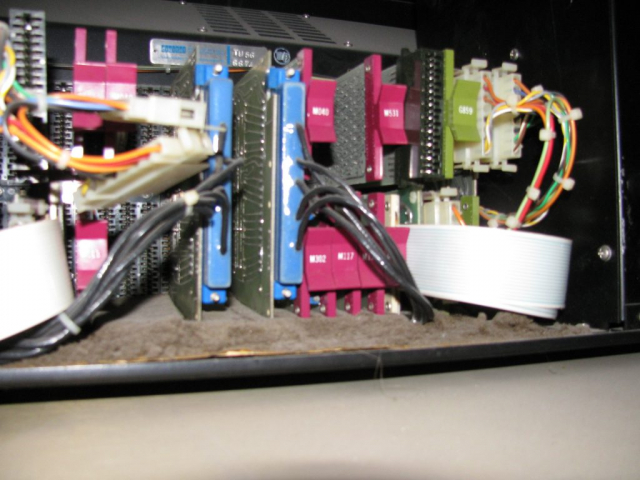 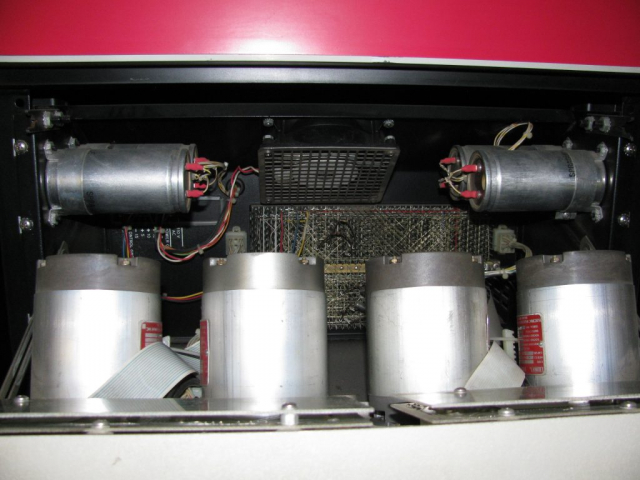 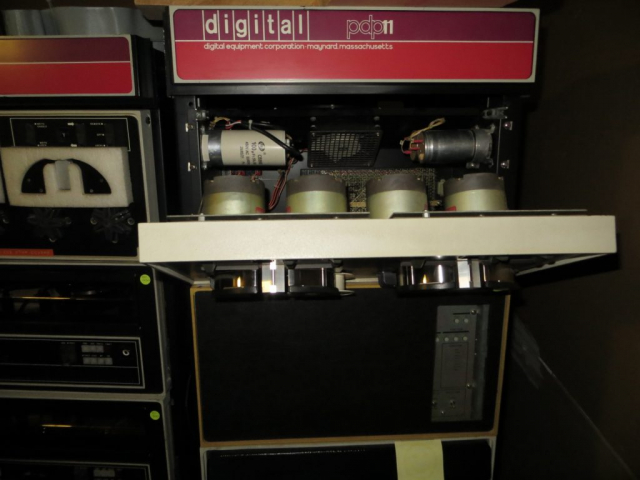 The Digital Equipment TU56 DECtape is the “classic” DEC minicomputer tape drive. It is block addressable, just like a disk drive. It contains 10 tracks – 5 tracks with 100% redundancy- a data timing track, a “mark” track and three data tracks. On a PDP-11 with a TC11 controller as shown in the first photo (part of my PDP-11/34), a tape contained 578 data blocks with 512 bytes each, or about the same amount of data as a floppy disk. My PDP-11/20 also has a DECtape drive. See the PDP-12 and PDP-11/34 for more photos of my other TU56 tape drives. On a PDP-12, the TU56 operates both as a PDP-8 DECtape drive, and as a LINCtape drive.

Each TU56 has 4 motor run (not motor start) capacitors, and they are showing their age. Fortunately, they are replaceable, though the replacements are slight different physically in size and color, they seem to work OK (last two photos show a before and after of one replacement). 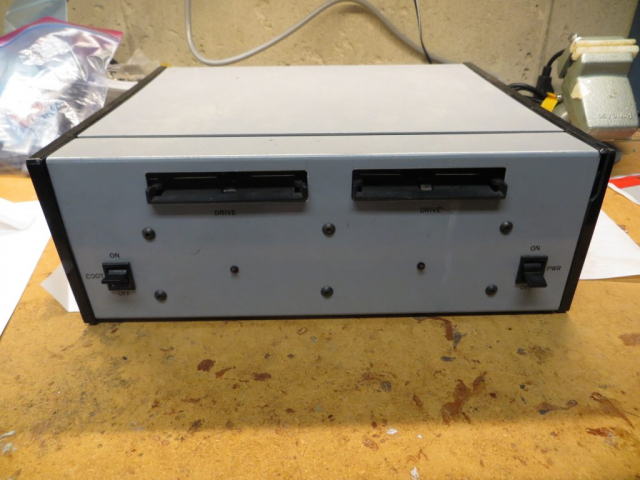 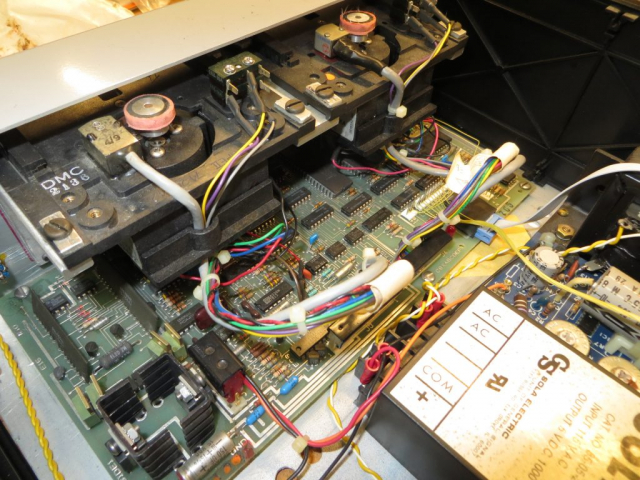 I have several TU58 DECtape II drive mechanisms and controller boards in my collection – several of them are new in their original boxes. The only thing I have ever actually used them for was to read in some VAX-11/30 diagnostic and VMS tapes. I don’t have any PDP-11 tapes that need a TU58. The TU58 uses an RS232 serial interface to talk to the host computer. The pair of drives shown here were installed in this cabinet by someone at the University of Wisconsin before I acquired the unit from the UW surplus SWAP program. The rubber rollers turned to “goo”, so I replaced them with some hose that had the proper inner diameter to fit onto the capstan head, and then ground down the outer diameter to more or less match the originals. That worked well enough to read almost all of the tapes. Looking at it here in 2019, it looks like I could have done a much better job of it. 😉

The collection has a pair of DLT-type drives. I didn’t put separate photos of them here, but you can follow these links to see them:

The TU60 was a digital format cassette recorder. This one came along with a TA11 (M8792) controller. Its rollers have undoubtedly turned to rubbish, and would have to be restored before I could read the numerous tapes I have for this drive. The word on the ‘net is that these drives are a real pain. More information on them can be found Malcolm Macleod’s website: here.

I acquired my first 9 track tape drive along with the PDP-11/24, from the University of Wisconsin surplus program. This drive, along with the 11/24, was located in historic Bascom Hall. It came along with a standalone backplane TM11 controller, and I had used it in connection with my PDP-11/20’s, PDP-11/24 and PDP-11/05. Unfortunately, I think I fried some chips on the TM11 when I attempted to use it to boot a PDP-11/04 that had been working but had failed. I think I plugged the UNIBUS cable to the TM11 into a Modified Unibus Device (MUD) slot. That was several years ago, and I haven’t gotten around to diagnosing it. I replaced several of the vacuum sensors on this drive many years ago with MPL-503 sensors purchased from pressureswitch.com set for 10″ H2O – and more have likely died since then. 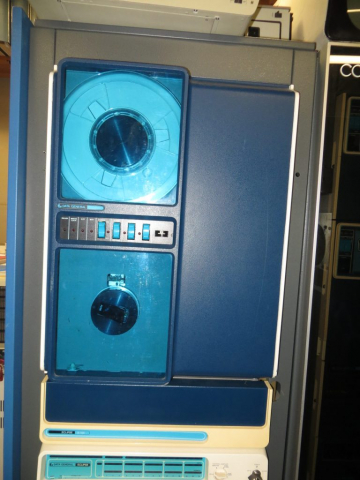 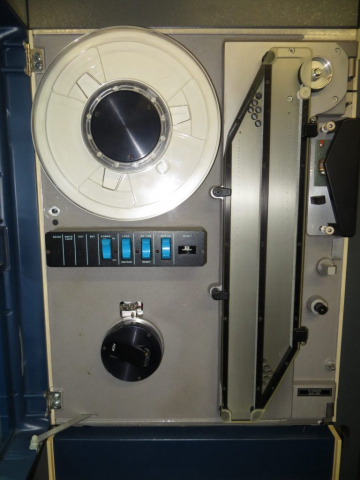 I also have a Data General 6021 9 track tape drive, acquired with my Nova 4. It too had some vacuum sensors replaced with MPL-503 sensors fro pressureswitch.com, some set to 10″ H20, some set to 20″ H20. It probably needs some more replaced. I have successfully used this drive with my Eclipse S/140 to make backups. 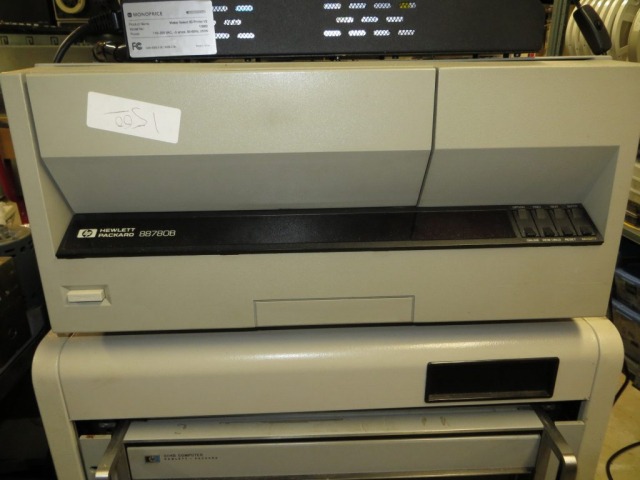 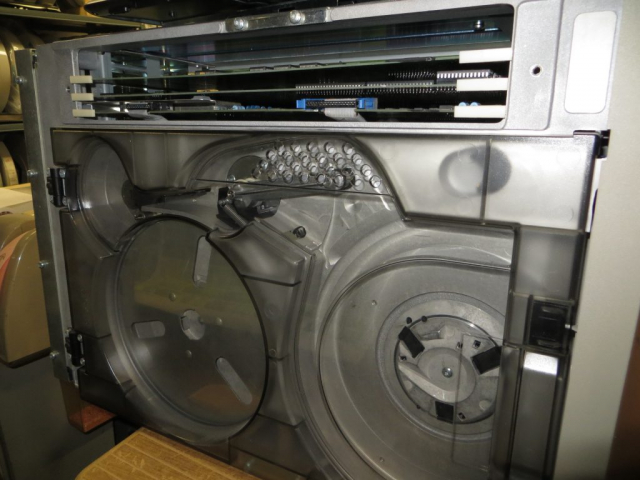 The collection has a pair of HP 88780 “modern” 9 track tape drives. One is an HP 88780B, currently with a SCSI interface installed, that was acquired from the University of Wisconsin surplus program for a whopping $15, and is my current “workhorse” 9 track drive. The other is an HP 88780A, currently with a Pertec interface installed, that I aquired on EBay. Originally, the HP 88780A had the SCSI interface, but it developed issues loading (perhaps a burned out light bulb or some such), so I swapped interfaces between the two. I use the HP 88780B with Linux to read old tapes using the standard Linux tape device with software of my own. Doing so I have recovered tapes from a PDP-10, IBM mainframes, Burroughs mainframes, UNIVAC mainframes, my DG and DEC minicomputers, and made images of almost all of the 9 track tapes in my collection.

This little guy was also obtained from UW Surplus, and it is not hooked up (though I believe I have the controller for it). The very small reels only handle very small tapes!

UPDATE: The TS03 has since been donated to the Large Scale Systems Museum.

This tape drive is sort of missing in action. I have this photo from 2012, and I believe it to be in my garage, but a quick check in 2019 did not turn it up. I suspect that it is a tape drive from the Unitote/Regitel systems which also contained my DCC Nova “clone” computers, because of the appearance of the tension arm in this photo.

UPDATE: This drive was indeed located in the garage, but it was NOT a tape drive from the Unitote/Regitel systems. Regardless, it has now been donated to the Large Scale Systems Museum.

I have three Pertec tape formatters – essentially controllers which accept the 100 pin “Pertec” computer interface, and connect to Pertec-compatible tape drives. (In more modern times, this function was provided by a board within the tape drive itself, such as on one of my HP88780 tape drives.) Two are model F649-72 and the third is model F649-40.